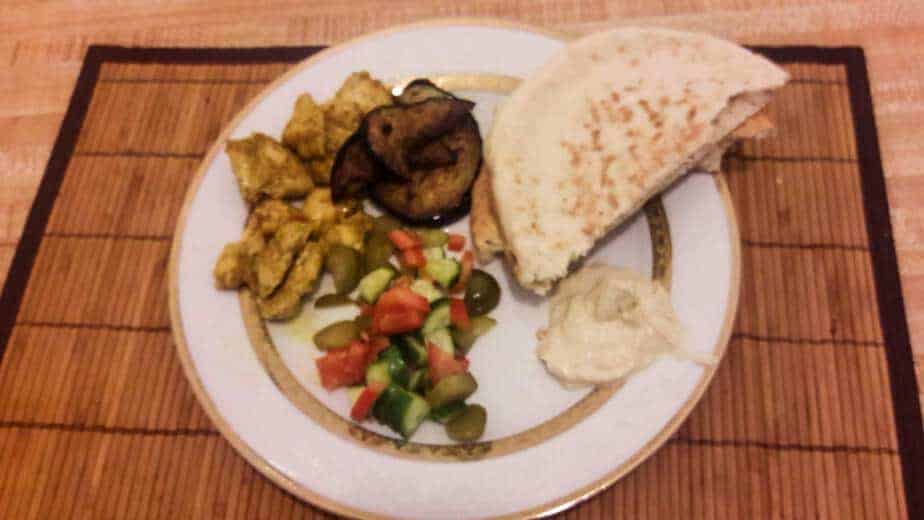 This Israeli chicken shawarma brings all the flavors of the Middle East right to your kitchen! Savory chicken, fried eggplant, vegetables, hummus – all you need for a perfect shawarma that you can make at home!

So this recipe has been sitting in my “to blog” list for awhile. I just never got around to, you know, blogging it. No real reason, really. I’m just super lazy. (I guess that’s reason enough in itself.)

In any event, the time has come for me to sit down and actually write up this recipe. (lol sit down and write up, that’s funny) (I have a weird sense of humor ok). But before getting to the actual recipe, let’s answer the question that I’m sure many of you are asking:

What is this shawarma thing, anyway?

So here’s a funny thing: I had always thought that shawarma was a Middle Eastern/Arabic dish, but when doing some research before writing this post (yes, I actually do research and put work into this blog…), I discovered that shawarma originated in Turkey, in the Ottoman Empire. The more you know.

Anyway, shawarma is a huge vertical rotisserie spit of thinly sliced meat or poultry that is tightly packed in a huge cone. The shawarma meat is shaved off the spit and stuffed into a pita or laffa (Israeli flatbread) and smothered in hummus, tahini, fried eggplant, sliced vegetables, pickles, and french fries. And it tastes. so. good. omg.

In the mood for a different ethnic chicken recipe? Then try this Guatemalan Jocon! Or you can try these Lebanese Chicken Kafta Burgers!

Correct. It is very similar to a gyro. Not that I’ve ever eaten gyros, but that is what Google tells me.

If shawarma is made on a giant spit, how can you make it at home?

Well, obviously you can’t make completely authentic, spit-roasted shawarma at home, unless you happen to have a giant spit just lying around. (We won’t judge.) But with the correct spices and sauces, you can make an imitation that tastes pretty darn close! As my brother once put it when he walked into my place while I was cooking the chicken, “it smells like a shawarma store in here, you’re just missing the smell of stale sweat.”

Well, we’re not adding sweat to our food, no matter how authentic it may make it smell. Sorry, Y.

Ok, I get the whole shawarma thing. But why is this “Israeli shawarma?” I thought you said shawarma is Turkish/Middle-Eastern?

Well. Israel is part of the Middle East, ya know. Just saying.

But also, there is a reason I am specifying it as Israeli. Due to kosher laws, Jews can’t eat dairy products and meat products together. Shawarma is often served with a yogurt sauce, but that won’t cut it, kosher-wise. Thus, shawarma in Israel usually skips the yogurt sauce and is served with lotsa hummus and tahini instead. Also, I am calling it Israeli chicken shawarma because I make it with chicken. (duh.) I’ve never made this with other types of meat, but hey, if you want to try it, I ain’t gonna stop you.

And if you like this Middle Eastern chicken recipe, you’ll love this Chicken Bastilla!

And now, the fun part: How to Make Israeli Chicken Shawarma

Disclosure: Product links may be affiliate, which means I get a commission if you click through and purchase. This does not affect the price of your item.

Step One: Marinate the Chicken Pieces

Take your boneless, skinless chicken breasts or deboned chicken thighs and cut them into little pieces. Kitchen shears are necessary for this step, in my not-so-humble opinion.

Once you’ve cut your chicken into small pieces, throw it into a ziploc bag and marinate it in oil, garlic, and some spices.

While you are waiting for the chicken to marinate, why not check out some of Creative Live’s free online classes? They have topics ranging from photography to finances, so you are sure to find something that tickles your fancy!

Take a medium-sized eggplant and slice it in half, and then into nice, thin circles. Heat a lot of oil in a large frying pan on high heat. When the oil is hot, carefully start adding eggplant slices to the pan. (Watch out, they will sizzle and oil may splatter!). Fry until dark brown on one side, and then flip them and fry ’em up on the other side. Using tongs will really help you here and save your fingers from oil splashes and burns.

Once the eggplant slices are finished frying, put them on a paper towel-lined plate to soak up some of the excess oil. (I’m not really sure why I bother, though; it’s kind of a lost cause. These eggplant slices are basically little sponges full of oil. They taste soooo good though, and are an essential part of your shawarma sandwich.)

Dice up some tomatoes, cucumbers, and pickles. (Pickles are a vegetable, right? Right?) Most shawarma places that I’ve been to in Israel only have tomatoes and cucumbers, but if you want some other veggies in your shawarma sandwich (i.e., if you are pretending to be healthy), then feel free.

After the chicken has marinated a bit, spread it out in a single layer in a pan or baking tray. Bake it at 350 until cooked through. If you plan this right (i.e., started marinating the chicken earlier in the day), you can bake the chicken while frying the eggplant or slicing the veggies. Hurray for multitasking!

Cut open your pita or spread out your laffa (if you are able to get your hands on laffa or make your own, it tastes so much better and is much easier and neater to assemble. Just saying.) Spread a generous layer of hummus on the laffa/in the pocket of the pita. Add a little bit of s’chug (Israeli hot sauce) onto the hummus, if you like a bit of a kick. Layer on your chicken, fried eggplant, pickles, and vegetables. Pour tahini over the whole thing. If using a laffa, roll it up like a wrap.

Enjoyed this recipe? Here are some others to try!

Pin this recipe for later!

As an Amazon Associate and member of other affiliate programs, I earn from qualifying purchases.

As a mother to three boys and a wife to a fourth, I’ve spent lots of time in the kitchen. Over the years, I went from not knowing how to cook anything (the first time I had to make dinner as a newlywed I called my mother and said, “Ma, I have this chicken sitting on my counter. What am I supposed to do with it?”) to making four-course meals weekly (fish and salads, soup, main, dessert. That’s four courses, right?).

Since I’m lazy and refuse to work hard in the kitchen, I’ve figured out lots of ways to save time and make simple food that tastes great. On Bites ‘N Pieces, I’m going to be sharing some of my hard-earned knowledge with you! Are you excited yet? (You should be.)

Make sure you subscribe so you don’t miss out on new recipes and cooking tips! And to stroke my ego and make me feel good. That’s totally a good reason to subscribe to a blog. Really.

As an Amazon Associate, I earn from qualifying purchases.