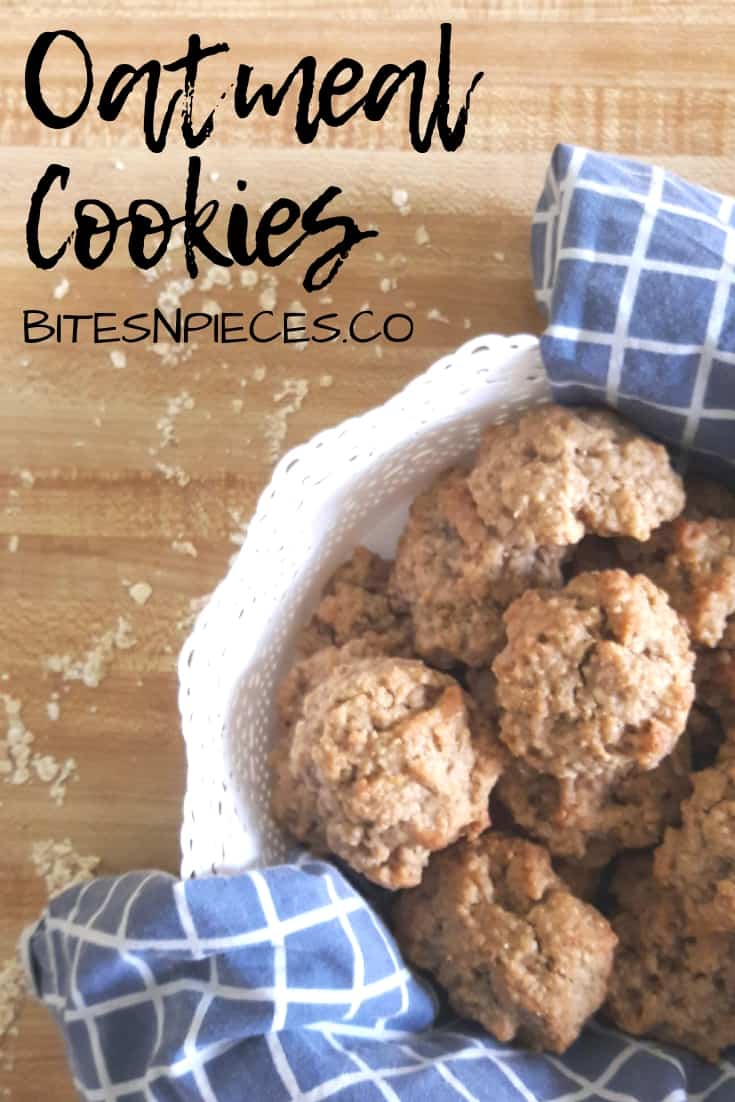 Disclosure: Product links may be affiliate, which means I get a commission if you click through and purchase. This does not affect the price of your item.

These oatmeal cinnamon cookies are pretty magical. Enjoy them with a large glass of milk, or just straight on their own – you will find that it’s pretty impossible to eat just one. Plus, these cookies use oil instead of butter, so they are dairy-free and can be made without a mixer. Pretty neat.

(I didn’t eat the raisins, though. Because raisins.)

At one point in high school, I baked oatmeal cookies with a friend at her house. It must have been two in the morning, and we were hyper and in the mood of cookie dough. So we made oatmeal cookies from the recipe on the Quaker package, baked them for like three minutes (so they were basically cookie dough on their own), and ate them straight out of the oven.

So when I became an adult and started doing adulty things like laundry and paying bills and baking (you know, all the important stuff), I naturally wanted to bake oatmeal cookies and recapture the magic of those childhood memories.

I tried the Quaker oatmeal recipe, and they just weren’t as good as I remembered. I got a recipe from my husband’s aunt which is apparently Hillary Clinton’s oatmeal chocolate chip cookie recipe (or, as my aunt put it, Hillary Clinton’s housekeeper’s recipe…), but they didn’t cut it. I tried some other recipes, and nope, nothing was quite meeting my expectations.

Until that one fateful day, when it all changed…

I decided that I wanted to try a different type of oatmeal cookie recipe, so I specifically looked for one with oil.

And I found a recipe. And it is pretty magical.

No, it is not the soft-baked oatmeal raisin cookies from my childhood, but these oatmeal cookies with oil instead of butter are delicious.

I recently made some huge, soft, chewy chocolate chip cookies, and my sister in law tasted them and said, “These are good, but I like the oatmeal cookies from last week better.”

I guess that’s proof that these oatmeal cinnamon cookies really are pretty amazing.

Ready for the recipe? Let’s dive right in!

(Unfortunately, I found this recipe in the stone ages when I was still writing recipes on index cards instead of saving the URLs of the recipes in my computer, so I don’t have a recipe source to link to.)

4. Add the oats and mix until combined.

Now, while this is obviously not a vegan blog, those of you who are vegan shouldn’t have to miss out on oatmeal cinnamon deliciousness! Here’s a great option for you guys, courtesy of Megan Kerry: Vegan Oatmeal Chocolate Chip Cookies.

If you enjoyed this recipe, make sure to share it with all your friends, relatives, acquaintances, and all the strangers on the street! 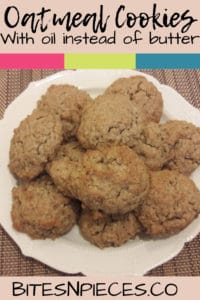 As an Amazon Associate and member of other affiliate programs, I earn from qualifying purchases.

As a mother to three boys and a wife to a fourth, I’ve spent lots of time in the kitchen. Over the years, I went from not knowing how to cook anything (the first time I had to make dinner as a newlywed I called my mother and said, “Ma, I have this chicken sitting on my counter. What am I supposed to do with it?”) to making four-course meals weekly (fish and salads, soup, main, dessert. That’s four courses, right?).

Since I’m lazy and refuse to work hard in the kitchen, I’ve figured out lots of ways to save time and make simple food that tastes great. On Bites ‘N Pieces, I’m going to be sharing some of my hard-earned knowledge with you! Are you excited yet? (You should be.)

Make sure you subscribe so you don’t miss out on new recipes and cooking tips! And to stroke my ego and make me feel good. That’s totally a good reason to subscribe to a blog. Really.

As an Amazon Associate, I earn from qualifying purchases.